What is the History of GandiKota Hills Kadapa

History of Gandikota Hills Kadapa
GandiKota fort is situated on the top of a hill, 1670 feet above the sea, overlooking the river.  GandiKota history dates back to Vijayanagara times, but the fort itself dates mainly from the period of the Qutub Shahis, who captured it in 1589. Inspite of claims by the Vijayanagara emperors, the forces of Qutub Shahis continued to occupy GandiKota, and were still in control of when Francois Taveriner, the famous French Traveller, halted there in 1652.
GandiKota was then captured by Arungazeb in 1687, and by beginning of 18th Century it came under control of Kadapa Nawabs. Haidar Ali improved and garrisoned the fort, later it came under the control of British in 1791.

Interesting Places at GandiKota Hills Gorge Kadapa
Madhavaraya Temple ,West of the settlement in GandiKota Fort, is more impressive. It is recognized by Its gopura, which has four storeyed, steeply pyramidal tower.

Jama Masjid Standing in a large quadrangle, that may have served as a caravanserai. The triple arched opening of its facade are overhung by sloping eaves; above rises a parapet with arched openings.

A large Granary with a vaulted roof stands to the North.
Ranganatha Swamy Temple, Beyond Granary, is entered through a collapsing gateway devoid of any tower, The Mandapa inside has finely finished animal piers.
Rayalcheruvu and Jail inside Fort. 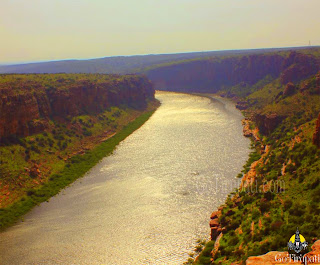