Tulabharam is a Hindu ritual that has been practised from Dwapara Yuga. Tulabharam means a person weighing himself or herself in a balance and pay in equal weight of gold, fruits or grains to God when one’s prayers are fulfilled.
The earliest reference to a Tulabharam comes from the Mahabharata, about the great emperor Sibi. He was so famous his name is found in ancient Tamil Sangam literature in four places and later in hundreds of places. He was even praised in Buddhist Jataka stories and Borobudur (Indonesia) sculptures. Emperor Sibi was a just king. Lord Indra and Agni wanted to test him and came in the form of an eagle and a dove. When the dove came to Sibi for protection from the chasing eagle, Sibi was ready to offer anything to save the dove. The eagle asked him to give his flesh measure for measure. Sibi cut himself bit by bit but the pans in the balance were never equal. At last when he himself stood on the pan the Gods appeared in front of him and blessed him. The story is found in other Sanskrit works as well.” 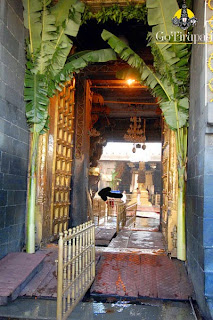