Goddess Gangamma is believed to have been born in Avilala, Tirupati. Tataiahgunta Gangamma Tirupati is worshiped as the younger sister of Lord Sri Venkateswara. The ‘jatara’ is ritualistically observed by native residents of Tirupati. Tataiahgunta Gangamma Jatara is the important festival for Tirupati people. People from different places visit this Temple during the festival. Tataiahgunta Gangamma Jatara is a annual festival which is observed in the first fortnight of May every year.
As a birthday gift from a brother to his sister, The Tirumala Tirupati Devasthanam sends “Parisu”, an auspicious gift on behalf of Lord Sri Venkateswara, which includes sarees, turmeric, kumkum, bangles etc., to Goddess Gangamma during the Jatara.
Gangamma temple in Tirupati is known as Tataiah gunta Gangamma. According to temple records, `Tataiahgunta' was associated with a 16th Century devotee,`Tirumala Thathacharyulu', who was said to have built a `Gunta'  (tank) and consecrated the temple near it.
Tataiahgunta Gangamma Jatara and History
According to folklore, Legend has it that the local chief called as “Palegadu” used to seduce beautiful women. As per his commands, newly-wed women were forced to spend their first wedded night with him. The women prayed to Goddess Jaganmatha who then took birth as Gangamma, at Avilala village, near Tirupati.
When she grew up, Palegadu cast his lustful eyes on Gangamma. Palegadu insulted Gangamma, by pulling her hand in full public view when the later rejected him. When She showed her frightening “Viswaroopam” to him, to escape death, Palegadu fled and hid himself in an unidentified location. In search of him, Gangamma wore several attires for three days. And On the fourth day, she lured the Palegadu, attired as his boss (dora). Mistaking her for his boss, Palegadu came into the public, only to be slain by her.
To mark this memorable event and thanksgiving gesture to the Jaganmatha in the form of Goddess Gangamma, Jatara celebration is being held by Tirupati people. 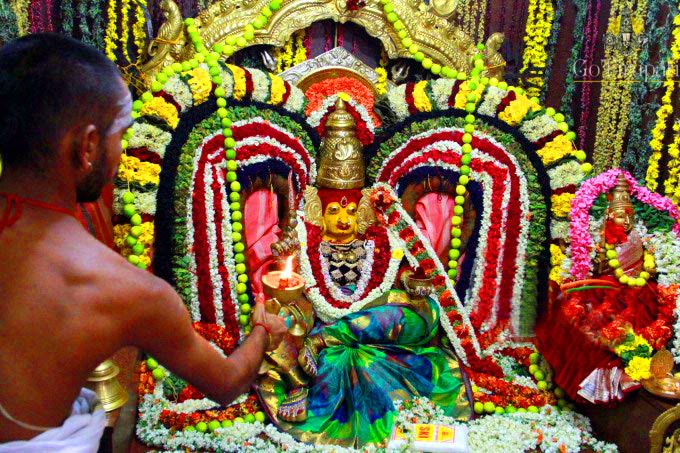