On Fridays, One can have a glimpse of Lord Venkateswara without ornaments called 'NijaPada Darshanam'.
The Lord Sri Venkateswara is always decorated with roses and other flower garlands. The Image of His Consort Sri Devi is etched on the right side of His Chest while other Consort Bhu Devi is etched on the left side of His Chest.
The Nagabharanam ornaments embellish His Shoulders. The Gold 'Yajnopavitham', the sacred thread, crosses the chest over His left Shoulder.  A cobra-like mark is seen around his right hand. The four arms are adorned with ornaments that resemble Naga Jewels. The slightly outstretched diamond-encrusted lower right hand, is in the boon-granting or Varadahastha pose, pointing symbolically towards His Lotus feet, the only refuge of His devotees in their quest to overcome the cycle of birth and death.

His Lower left hand is in the Katihastha or Katiyavalambita pose in which the thumb is placed on the thigh and other fingers are almost parallel to the waist. It symbolically indicates that the troubles of life are only knee-deep once the devotees seek His refuge and assures His devotees of His protection.

His dark body is clothed with a Pithambaram fastended with a golden string and encircled with a Dasavatharam gold belt to which are attached tiny, jingling gold bells. The 'Surya Katari' or the Sword of the Sun hangs from the Dasavatharam belt. It is believed that the Sun God presented this belt to Lord Sri Venkateswara.
His Legs and Lotus feet are covered in gold and sport golden anklets with tiny bells. Since the idol of Lord Sri Venkateswara has not been sculpted according to the specifications given in the Agama Sastras for Idols, it is presumed to belong to an older era when the Sastras has not been formulated. 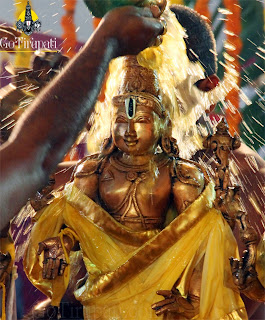