It is believed that this deity exists from Krutayugam. In 14th Century AD, Great Scholar Sankara Battu mentioned this temple in his Sanskrit "Sri Pada Sri Vallabha Charitra" 5th chapter. As mentioned in the Charita, the villagers performed a Sarva Ganapathi Maha Yagna in 1320 AD and Lord appeared in the Yagna fire and accepted the offerings. Lord told them that he will take birth as SriPada Srivallabha. In the same chapter, it was mentioned that three atheists commented Ganapati because which they took the birth with disabilities Dumb,deaf and Blind. Later, these three discovered the Idol in the well while ploughing and got their actual forms. This place popular by the name Kanipakam Vinayaka. Ainavilli Vinayaka self-manifested here and is older than Kanipakam Vinayaka Temple. It is also said that Daksha Prajapati offered prayers to the Lord at Ainavilli before Daksha Yagna. 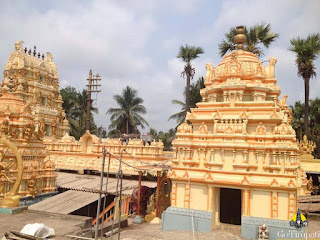