In olden days, this place was popular by the name Mandya Puram. Moolsthaneswara Swamy is one of the five Siva temples which were built on the Swarna Mukhi river which starts at Chandragiri and continues journey through Sri Kalahasti.

Siva Linga was discovered by the dumb farmer while plowing the farm land. Blood started oozing out of the Linga which was hit by the plow . Dumb farmer started shouting after seeing the special lights from the Linga. Villagers unearthed the Self-manifested Siva Linga. Later, Chola Kings installed Swayambhu and One Linga of 3 feet height in the same complex.
From the inscriptions written in Tamil and Telugu, it is known that this temple was built by Chola Kings and is of 1000 years old. Temple received huge contributions during Chola period. The inner structure resembles Gudimallam temple architecture. 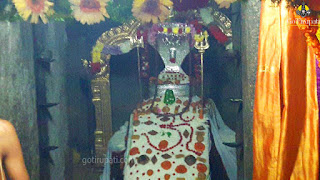